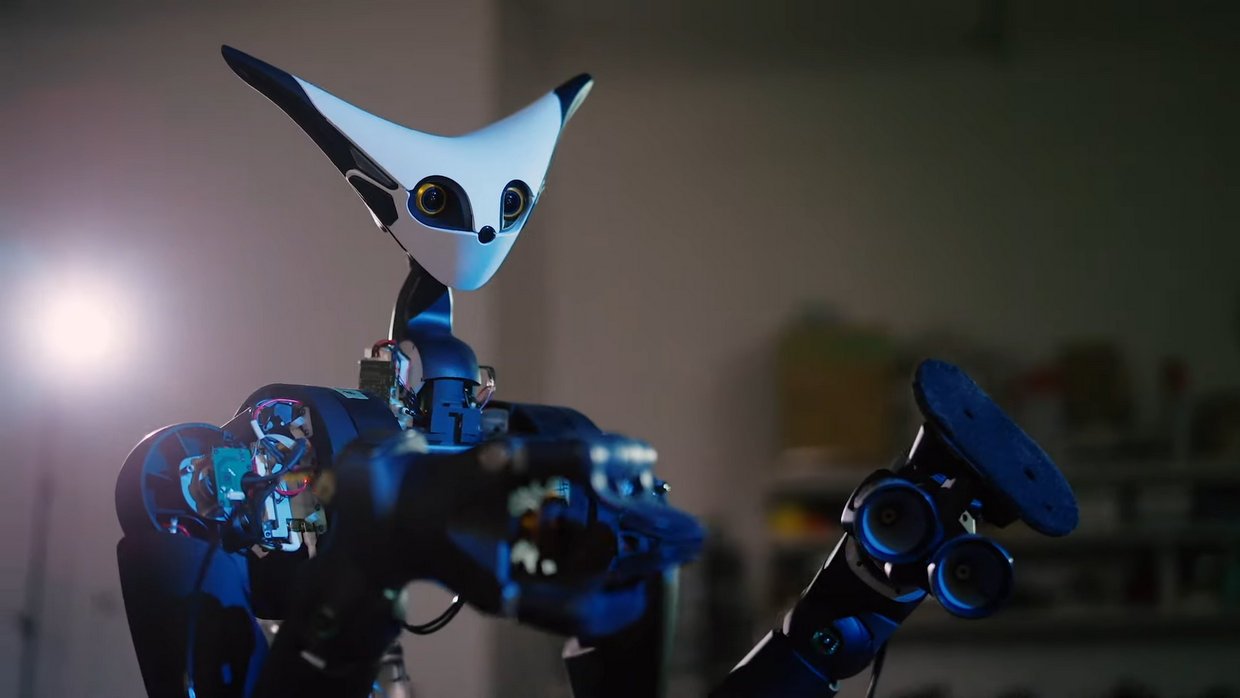 I don’t know why Telexistence’s robots look the way they do, but I love it. They’ve got an ambitious vision as well, and just raised $20 million to make it happen.

A team of researchers of the Robotic Materials Department at the Max Planck Institute for Intelligent Systems and at the University of Colorado Boulder in the US has now found a new way to exploit the principles of spiders’ joints to drive articulated robots without any bulky components and connectors, which weigh down the robot and reduce portability and speed. Their slender and lightweight simple structures impress by enabling a robot to jump 10 times its height.

For those of you who (like me) have been wondering where Spot’s mouth is, here you go.

Meet Scythe: the self-driving, all-electric machine that multiplies commercial landscapers’ ability to care for the outdoors.

Huge congrats do Dusty Robotics on its $16.5 million Series A!

A team of scientists at Nanyang Technological University, Singapore (NTU Singapore) has developed millimetre-sized robots that can be controlled using magnetic fields to perform highly manoeuvrable and dexterous manipulations. This could pave the way to possible future applications in biomedicine and manufacturing.

The made-in-NTU robots improve on many existing small-scale robots by optimizing their ability to move in six degrees-of-freedom (DoF) – that is, translational movement along the three spatial axes, and rotational movement about those three axes, commonly known as roll, pitch and yaw angles.

While researchers have previously created six DoF miniature robots, the new NTU miniature robots can rotate 43 times faster than them in the critical sixth DoF when their orientation is precisely controlled. They can also be made with ‘soft’ materials and thus can replicate important mechanical qualities—one type can ‘swim’ like a jellyfish, and another has a gripping ability that can precisely pick and place miniature objects.

Not a lot of commercial mobile robots that can handle stairs, but ROVéo is one of them.

In preparation for the SubT Final this September, Team Robotika has been practicing its autonomous cave mapping.

Aurora makes some cool stuff, much of which is now autonomous.

I appreciate the thought here, but this seems like a pretty meh example of the usefulness of a cobot.

Analysis of the manipulation strategies employed by upper-limb prosthetic device users can provide valuable insights into the shortcomings of current prosthetic technology or therapeutic interventions. Typically, this problem has been approached with survey or lab-based studies, whose prehensile-grasp-focused results do not necessarily give accurate representations of daily activity. In this work, we capture prosthesis-user behavior in the unstructured and familiar environments of the participants own homes.

From HRI 2020, DFKI’s new series-parallel hybrid humanoid called RH5, which is 2 m tall and weighs only 62.5 kg capable of performing heavy-duty dynamic tasks with 5 kg payloads in each hand.

Davide Scaramuzza’s presentation from the ICRA 2021 Full-Day workshop on Opportunities and Challenges with Autonomous Racing.

The IEEE Robotics and Automation Society (IEEE/RAS) and the (IFR International Federation of Robotics) awarded the 2021 “Award for Innovation and Entrepreneurship in Robotics & Automation,” er, award, to Kuka for its PixelPaint technology. You can see their finalist presentation, along with presentations from the other worthy finalists in this video.