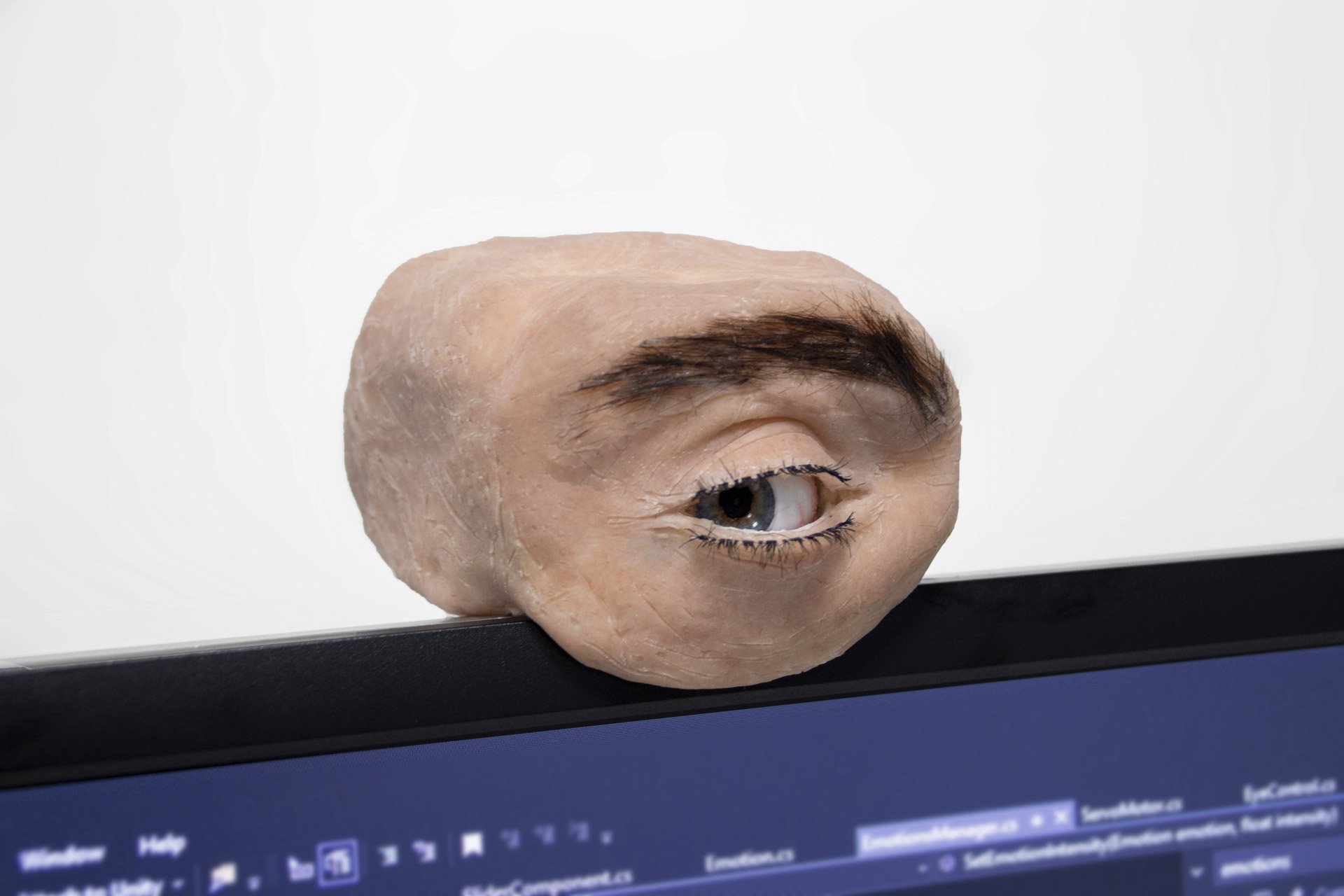 What if seeing devices looked like us? Eyecam is a prototype exploring the potential future design of sensing devices. Eyecam is a webcam shaped like a human eye that can see, blink, look around and observe us.

And it’s open source, so you can build your own!

Looks like Festo will be turning some of its bionic robots into educational kits, which is a pretty cool idea.

Underwater soft robots are challenging to model and control because of their high degrees of freedom and their intricate coupling with water. In this paper, we present a method that leverages the recent development in differentiable simulation coupled with a differentiable, analytical hydrodynamic model to assist with the modeling and control of an underwater soft robot. We apply this method to Starfish, a customized soft robot design that is easy to fabricate and intuitive to manipulate.

Rainbow Robotics, the company who made HUBO, has a new collaborative robot arm.

We develop an integrated robotic platform for advanced collaborative robots and demonstrates an application of multiple robots collaboratively transporting an object to different positions in a factory environment. The proposed platform integrates a drone, a mobile manipulator robot, and a dual-arm robot to work autonomously, while also collaborating with a human worker. The platform also demonstrates the potential of a novel manufacturing process, which incorporates adaptive and collaborative intelligence to improve the efficiency of mass customization for the factory of the future.

In Sevastopol State University the team of the Laboratory of Underwater Robotics and Control Systems and Research and Production Association “Android Technika” performed tests of an underwater anropomorphic manipulator robot.

Taiwanese company TCI Gene created a COVID test system based on their fully automated and enclosed gene testing machine QVS-96S. The system includes two ABB robots and carries out 1800 tests per day, operating 24/7. Every hour 96 virus samples tests are made with an accuracy of 99.99%.

A short video showing how a Halodi Robotics can be used in a commercial guarding application.

During the past five years, under the NASA Early Space Innovations program, we have been developing new design optimization methods for underactuated robot hands, aiming to achieve versatile manipulation in highly constrained environments. We have prototyped hands for NASA’s Astrobee robot, an in-orbit assistive free flyer for the International Space Station.

The new, improved OTTO 1500 is a workhorse AMR designed to move heavy payloads through demanding environments faster than any other AMR on the market, with zero compromise to safety.

Very, very high performance sensing and actuation to pull this off.

We introduce a conversational social robot designed for long-term in-home use to help with loneliness. We present a novel robot behavior design to have simple self-reflection conversations with people to improve wellness, while still being feasible, deployable, and safe.

We are one of the 5 winners of the Start-up Challenge. This video illustrates what we achieved during the Swisscom 5G exploration week. Our proof-of-concept tele-excavation system is composed of a Menzi Muck M545 walking excavator automated & customized by Robotic Systems Lab and IBEX motion platform as the operator station. The operator and remote machine are connected for the first time via a 5G network infrastructure which was brought to our test field by Swisscom.

This video shows LOLA balancing on different terrain when being pushed in different directions. The robot is technically blind, not using any camera-based or prior information on the terrain (hard ground is assumed).

A hierarchical and robust framework for learning bipedal locomotion is presented and successfully implemented on the 3D biped robot Digit. The feasibility of the method is demonstrated by successfully transferring the learned policy in simulation to the Digit robot hardware, realizing sustained walking gaits under external force disturbances and challenging terrains not included during the training process.

This is a video summary of the Center for Robot-Assisted Search and Rescue’s deployments under the direction of emergency response agencies to more than 30 disasters in five countries from 2001 (9/11 World Trade Center) to 2018 (Hurricane Michael). It includes the first use of ground robots for a disaster (WTC, 2001), the first use of small unmanned aerial systems (Hurricane Katrina 2005), and the first use of water surface vehicles (Hurricane Wilma, 2005).

In March, a team from the Oxford Robotics Institute collected a week of epic off-road driving data, as part of the Sense-Assess-eXplain (SAX) project.

As a part of the AAAI 2021 Spring Symposium Series, HEBI Robotics was invited to present an Industry Talk on the symposium’s topic: Machine Learning for Mobile Robot Navigation in the Wild. Included in this presentation was a short case study on one of our upcoming mobile robots that is being designed to successfully navigate unstructured environments where today’s robots struggle.

This Lockheed Martin Robotics Seminar is from Chad Jenkins at the University of Michigan, on “Semantic Robot Programming… and Maybe Making the World a Better Place.”

I will present our efforts towards accessible and general methods of robot programming from the demonstrations of human users. Our recent work has focused on Semantic Robot Programming (SRP), a declarative paradigm for robot programming by demonstration that builds on semantic mapping. In contrast to procedural methods for motion imitation in configuration space, SRP is suited to generalize user demonstrations of goal scenes in workspace, such as for manipulation in cluttered environments. SRP extends our efforts to crowdsource robot learning from demonstration at scale through messaging protocols suited to web/cloud robotics. With such scaling of robotics in mind, prospects for cultivating both equal opportunity and technological excellence will be discussed in the context of broadening and strengthening Title IX and Title VI.