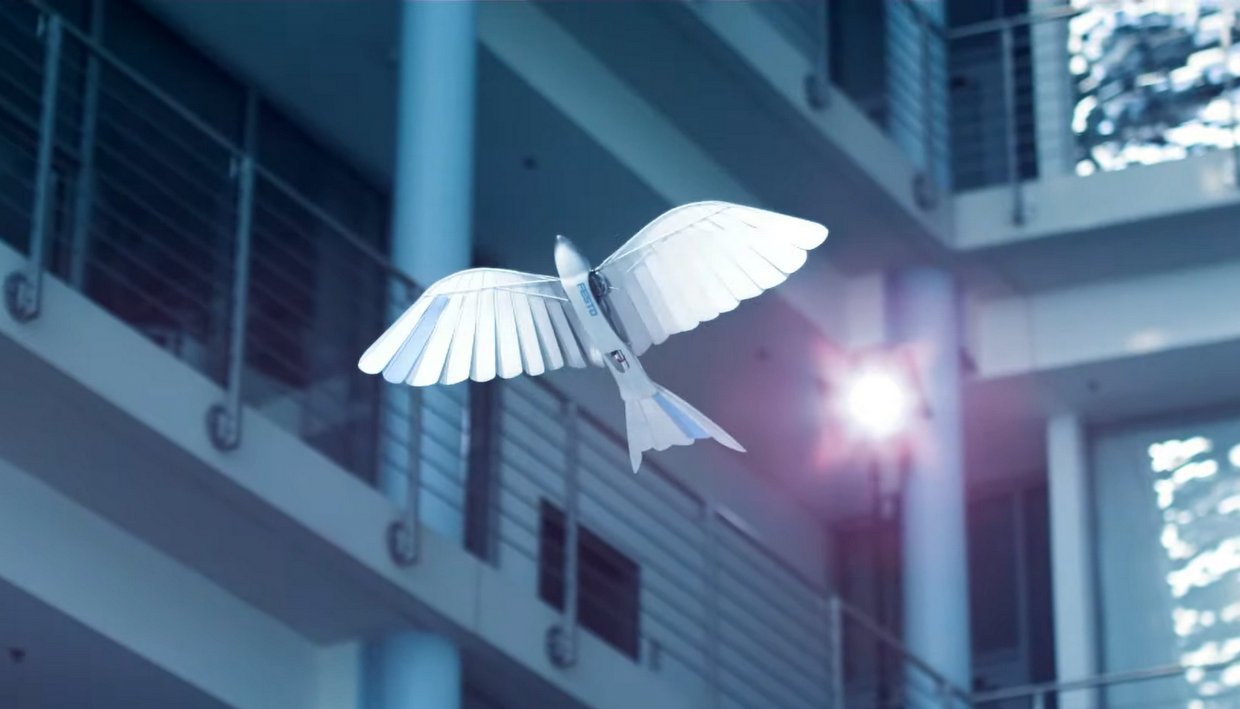 Festo’s Bionic Learning Network for 2021 presents a flock of BionicSwifts.

To execute the flight maneuvers as true to life as possible, the wings are modeled on the plumage of birds. The individual lamellae are made of an ultralight, flexible but very robust foam and lie on top of each other like shingles. Connected to a carbon quill, they are attached to the actual hand and arm wings as in the natural model.

During the wing upstroke, the individual lamellae fan out so that air can flow through the wing. This means that the birds need less force to pull the wing up. During the downstroke, the lamellae close up so that the birds can generate more power to fly. Due to this close-to-nature replica of the wings, the BionicSwifts have a better flight profile than previous wing-beating drives.

While we’ve seen a wide variety of COVID-motivated disinfecting robots, they’re usually using either ultraviolet light or a chemical fog. This isn’t the way that humans clean—we wipe stuff down, which gets rid of surface dirt and disinfects at the same time. Fraunhofer has been working on a mobile manipulator that can clean in the same ways that we do.

It’s quite the technical challenge, but it has the potential to be both more efficient and more effective.

In recent years, robots have gained artificial vision, touch, and even smell. “Researchers have been giving robots human-like perception,” says MIT Associate Professor Fadel Adib. In a new paper, Adib’s team is pushing the technology a step further. “We’re trying to give robots superhuman perception,” he says. The researchers have developed a robot that uses radio waves, which can pass through walls, to sense occluded objects. The robot, called RF-Grasp, combines this powerful sensing with more traditional computer vision to locate and grasp items that might otherwise be blocked from view.

Ingenuity is now scheduled to fly on April 11.

The legendary Zenta is back after a two year YouTube hiatus with “a kind of freaky furry hexapod bunny creature.”

It is with great pride and excitement that the South Australia Police announce a new expansion to their kennel by introducing three new Police Dog (PD) recruits. These dogs have been purposely targeted to bring a whole new range of dog operational capabilities known as the ‘small area urban search and guided evacuation’ dogs. Police have been working closely with specialist vets and dog trainers to ascertain if the lightweight dogs could be transported safely by drones and released into hard-to-access areas where at the moment the larger PDs just simply cannot get in due to their size.

SoftBank may not have Spot cheerleading robots for their baseball team anymore, but they’ve more than made up for it with a full century of Peppers. And one dude doing the robot.

MAB Robotics is a Polish company developing walking robots for inspection, and here’s a prototype they’ve been working on.

DoraNose: Smell your way to a better tomorrow.

Our robots need to learn how to cope with their new neighbors, and we have just the solution for this, the egg detector! Using cutting-edge AI, it provides incredible precision in detecting a vast variety of eggs. We have deployed this new feature on Boston Dynamics Spot, one of our fleet’s robots. It can now detect eggs with its cameras and avoid them on his autonomous missions.

When dropping a squishy robot from an airplane 1,000 feet up, make sure that you land as close to people’s cars as you can.

Now do it from orbit!

An autonomous robot that is able to physically guide humans through narrow and cluttered spaces could be a big boon to the visually-impaired. Most prior robotic guiding systems are based on wheeled platforms with large bases with actuated rigid guiding canes. The large bases and the actuated arms limit these prior approaches from operating in narrow and cluttered environments. We propose a method that introduces a quadrupedal robot with a leash to enable the robot-guiding-human system to change its intrinsic dimension (by letting the leash go slack) in order to fit into narrow spaces.

How to prove that your drone is waterproof.

Well this ought to be pretty good once it gets out of simulation.

MIDAS is Aurora’s AI-enabled, multi-rotor sUAV outfitted with optical sensors and a customized payload that can defeat multiple small UAVs per flight with low-collateral effects.

The robots​ of the DFKI have the advantage of being able to reach extreme environments: they can be used for decontamination purposes in high-risk areas or inspect and maintain underwater​ structures, for which they are tested in the North Sea near Heligoland​.

After years of trying, 60 Minutes cameras finally get a peek inside the workshop at Boston Dynamics, where robots move in ways once only thought possible in movies. Anderson Cooper reports.

In 2007, Noel Sharky stated that “we are sleepwalking into a brave new world where robots decide who, where and when to kill.” Since then thousands of AI and robotics researchers have joined his calls to regulate “killer robots.” But sometime this year, Turkey will deploy fully autonomous home-built kamikaze drones on its border with Syria. What are the ethical choices we need to consider? Will we end up in an episode of Black Mirror? Or is the UN listening to calls and starting the process of regulating this space? Prof. Toby Walsh will discuss this important issue, consider where we are at and where we need to go.

The field of robotics has evolved over the past few decades. We’ve seen robots progress from the automation of repetitive tasks in manufacturing to the autonomy of mobilizing in unstructured environments to the cooperation of swarm robots that are centralized or decentralized. These abilities have required advances in robotic hardware, modeling, and artificial intelligence. The next frontier is robots collaborating in complex tasks with human teammates, in environments traditionally configured for humans. While solutions to this challenge must utilize all the advances of robotics, the human element adds a unique aspect that must be addressed. Collaborating with a human teammate means that the robot must have a contextual understanding of the task as well as all participant’s roles. We will discuss what constitutes an effective teammate and how we can capture this behavior in a robotic collaborator.