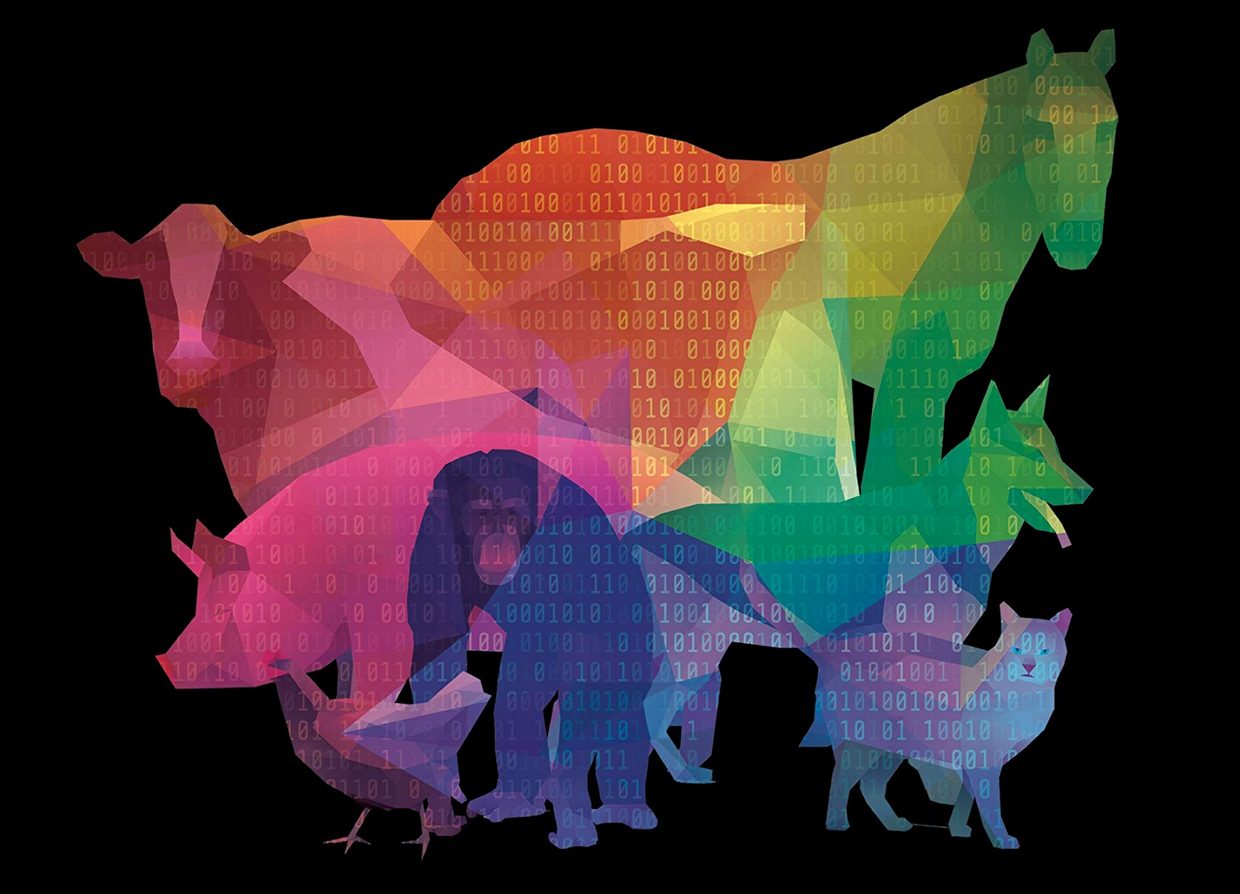 When the first black-and-white motion pictures came to the screen, an 1896 film showing in a Paris cinema is said to have caused a stampede: the first-time moviegoers, watching a giant train barrel toward them, jumped out of their seats and ran away from the screen in panic. According to film scholar Martin Loiperdinger, this story is no more than an urban legend. But this new media format, “moving pictures,” proved to be both immersive and compelling, and was here to stay. Thanks to a baked-in ability to interpret motion, we’re fascinated even by very simple animation because it tells stories we intuitively understand.

In a seminal study from the 1940s, psychologists Fritz Heider and Marianne Simmel showed participants a black-and-white movie of simple, geometrical shapes moving around on a screen. When instructed to describe what they were seeing, nearly every single one of their participants interpreted the shapes to be moving around with agency and purpose. They described the behavior of the triangles and circle the way we describe people’s behavior, by assuming intent and motives. Many of them went so far as to create a complex narrative around the moving shapes. According to one participant: “A man has planned to meet a girl and the girl comes along with another man. [ . . . ] The girl gets worried and races from one corner to the other in the far part of the room. [ . . . ] The girl gets out of the room in a sudden dash just as man number two gets the door open. The two chase around the outside of the room together, followed by man number one. But they finally elude him and get away. The first man goes back and tries to open his door, but he is so blinded by rage and frustration that he can not open it.”

What brought the shapes to life for Heider and Simmel’s participants was solely their movement. We can interpret certain movement in other entities as “worried,” “frustrated,” or “blinded by rage,” even when the “other” is a simple black triangle moving across a white background. A number of studies document how much information we can extract from very basic cues, getting us to assign emotions and gender identity to things as simple as moving points of light. And while we might not run away from a train on a screen, we’re still able to interpret the movement and may even get a little thrill from watching the train in a more modern 3D screening. (There are certainly some embarrassing videos of people—maybe even of me—when we first played games wearing virtual reality headsets.)

Many scientists believe that autonomous movement activates our “life detector.” Because we’ve evolved needing to quickly identify natural predators, our brains are on constant lookout for moving agents. In fact, our perception is so attuned to movement that we separate things into objects and agents, even if we’re looking at a still image. Researchers Joshua New, Leda Cosmides, and John Tooby showed people photos of a variety of scenes, like a nature landscape, a city scene, or an office desk. Then, they switched in an identical image with one addition; for example, a bird, a coffee mug, an elephant, a silo, or a vehicle. They measured how quickly the participants could identify the new appearance. People were substantially quicker and more accurate at detecting the animals compared to all of the other categories, including larger objects and vehicles.

The researchers also found evidence that animal detection activated an entirely different region of people’s brains. Research like this suggests that a specific part of our brain is constantly monitoring for lifelike animal movement. This study in particular also suggests that our ability to separate animals and objects is more likely to be driven by deep ancestral priorities than our own life experiences. Even though we have been living with cars for our whole lives, and they are now more dangerous to us than bears or tigers, we’re still much quicker to detect the presence of an animal.

The biological hardwiring that detects and interprets life in autonomous agent movement is even stronger when it has a body and is in the room with us. John Harris and Ehud Sharlin at the University of Calgary tested this projection with a moving stick. They took a long piece of wood, about the size of a twirler’s baton, and attached one end to a base with motors and eight degrees of freedom. This allowed the researchers to control the stick remotely and wave it around: fast, slow, doing figure eights, etc. They asked the experiment participants to spend some time alone in a room with the moving stick. Then, they had the participants describe their experience.

Only two of the thirty participants described the stick’s movement in technical terms. The others told the researchers that the stick was bowing or otherwise greeting them, claimed it was aggressive and trying to attack them, described it as pensive, “hiding something,” or even “purring happily.” At least ten people said the stick was “dancing.” One woman told the stick to stop pointing at her.

If people can imbue a moving stick with agency, what happens when they meet R2-D2? Given our social tendencies and ingrained responses to lifelike movement in our physical space, it’s fairly unsurprising that people perceive robots as being alive. Robots are physical objects in our space that often move in a way that seems (to our lizard brains) to have agency. A lot of the time, we don’t perceive robots as objects—to us, they are agents. And, while we may enjoy the concept of pet rocks, we love to anthropomorphize agent behavior even more.

We already have a slew of interesting research in this area. For example, people think a robot that’s present in a room with them is more enjoyable than the same robot on a screen and will follow its gaze, mimic its behavior, and be more willing to take the physical robot’s advice. We speak more to embodied robots, smile more, and are more likely to want to interact with them again. People are more willing to obey orders from a physical robot than a computer. When left alone in a room and given the opportunity to cheat on a game, people cheat less when a robot is with them. And children learn more from working with a robot compared to the same character on a screen. We are better at recognizing a robot’s emotional cues and empathize more with physical robots. When researchers told children to put a robot in a closet (while the robot protested and said it was afraid of the dark), many of the kids were hesitant.

Even adults will hesitate to switch off or hit a robot, especially when they perceive it as intelligent. People are polite to robots and try to help them. People greet robots even if no greeting is required and are friendlier if a robot greets them first. People reciprocate when robots help them. And, like the socially inept [software office assistant] Clippy, when people don’t like a robot, they will call it names. What’s noteworthy in the context of our human comparison is that the robots don’t need to look anything like humans for this to happen. In fact, even very simple robots, when they move around with “purpose,” elicit an inordinate amount of projection from the humans they encounter. Take robot vacuum cleaners. By 2004, a million of them had been deployed and were sweeping through people’s homes, vacuuming dirt, entertaining cats, and occasionally getting stuck in shag rugs. The first versions of the disc-shaped devices had sensors to detect things like steep drop-offs, but for the most part they just bumbled around randomly, changing direction whenever they hit a wall or a chair.

iRobot, the company that makes the most popular version (the Roomba) soon noticed that their customers would send their vacuum cleaners in for repair with names (Dustin Bieber being one of my favorites). Some Roomba owners would talk about their robot as though it were a pet. People who sent in malfunctioning devices would complain about the company’s generous policy to offer them a brand-new replacement, demanding that they instead fix “Meryl Sweep” and send her back. The fact that the Roombas roamed around on their own lent them a social presence that people’s traditional, handheld vacuum cleaners lacked. People decorated them, talked to them, and felt bad for them when they got tangled in the curtains.

Tech journalists reported on the Roomba’s effect, calling robovacs “the new pet craze.” A 2007 study found that many people had a social relationship with their Roombas and would describe them in terms that evoked people or animals. Today, over 80 percent of Roombas have names. I don’t have access to naming statistics for the handheld Dyson vacuum cleaner, but I’m pretty sure the number is lower.

Robots are entering our lives in many shapes and forms, and even some of the most simple or mechanical robots can prompt a visceral response. And the design of robots isn’t likely to shift away from evoking our biological reactions—especially because some robots are designed to mimic lifelike movement on purpose.

Excerpted from THE NEW BREED: What Our History with Animals Reveals about Our Future with Robots by Kate Darling. Published by Henry Holt and Company. Copyright © 2021 by Kate Darling. All rights reserved.

Kate’s book is available today from Annie Bloom’s Books in SW Portland, Oregon. It’s also available from Powell’s Books, and if you don’t have the good fortune of living in Portland, you can find it in both print and digital formats pretty much everywhere else books are sold.

As for Robovie, the claustrophobic robot that kept getting shoved in a closet, we recently checked in with Peter Kahn, the researcher who created the experiment nearly a decade ago, to make sure that the poor robot ended up okay. “Robovie is doing well,” Khan told us. “He visited my lab on 2-3 other occasions and participated in other experiments. Now he’s back in Japan with the person who helped make him, and who cares a lot about him.” That person is Takayuki Kanda at ATR, who we’re happy to report is still working with Robovie in the context of human-robot interaction. Thanks Robovie!