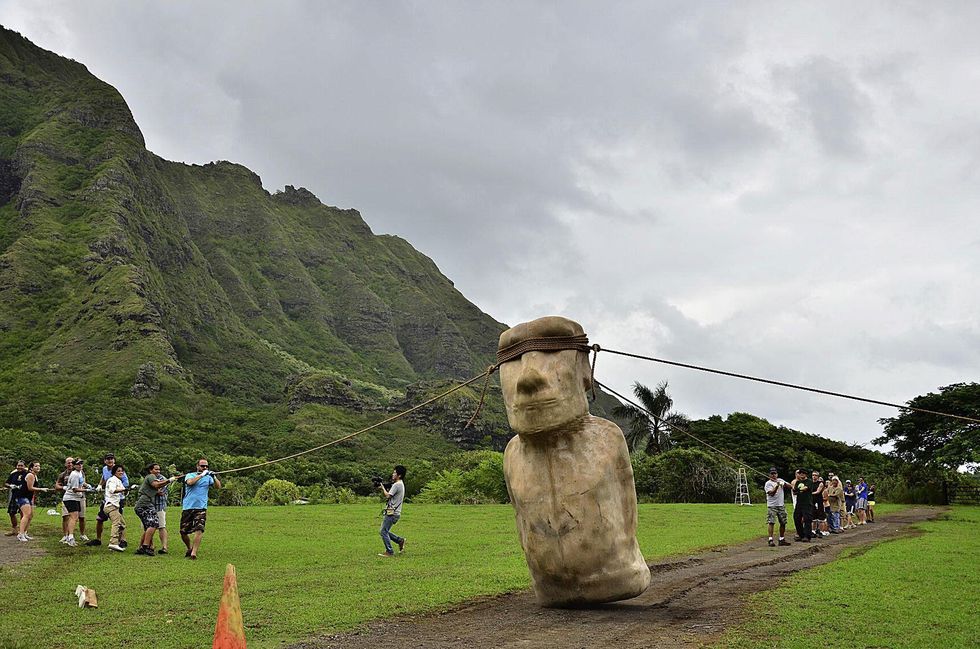 People around the world have long been captivated by the moai, a collection of statues that stand sentry along the coast of Easter Island. The statues are well known not just for their immense size and distinct facial features (e.g., very broad noses and chins), but also for the mystery that shrouds their geographic location. The question that piques everyone’s curiosity is: how did ancient Rapa Nui people move these ginormous rocks – some weighing as much as 80 metric tons–across distances of up to 18 kilometers?

In 2011, a group of archeologists made some progress in potentially unravelling this mystery. They conducted an experiment whereby three hemp ropes were tied to the head of a moai replica. Using two of the ropes angled at the sides to rock the statue back and forth, and the third rope for guidance, they were able to “rock and walk” the replica forward, demonstrating at least one possible way that the Rapa Nui people may have moved the real moai so many centuries ago. In the experiment, 18 people were able to move a 4.35 metric ton replica 100 meters in just 40 min.

More recently, a group of researchers sought to use robots to employ this “rock-and-walk” technique further. Jungwon Seo, an Assistant Professor at Hong Kong University of Science and Technology, has previously used robots to study how to precisely move and place Go stones.

“Objects heavier than a Go stone, like the moai statue, may pose additional fresh challenges. But we were motivated by the difficulty,” he says.

His team devised a “rock-and-walk” technique and implemented it four different ways using single or dual robotic arms, or single or dual custom-made quadrotor aircrafts. They describe their work in a study published 21 January in IEEE Transactions on Robotics.

In all of the scenarios, the researchers used an object that had features similar to those of the moai, such as a low center of gravity and a round edge along the bottom, the latter of which helps facilitate the dynamic rolling maneuvers. As well, wider bases allow the objects to take bigger “steps” forward.

In the first experiment, a single robotic arm was used to rock-and-walk a weighted object with a wide base. The robotic arm used a small cage to hold the top of the object and manipulate it.

In another set up, two robotic arms, one on either side of the object, manipulated it using cables attached near its top (this scenario is most similar to how the archeologists moved the moai replica).

Similar trials featured either one or two quadrotor aircrafts. Regardless of how many points of contact are used to manipulate an object, the benefits of the rock-and-walk technique are undeniable. Because part of the object remains in contact with the ground, the robots need to bear only a fraction of the object’s weight using this technique.

For example, the experiments showed that, whereas the quadrotor aircraft needed to expend 100 percent thrust to lift a 1-kilogram payload, it only needed 20 percent thrust to perform the rock-and-walk technique with the same object.

“If the object can’t be lifted for some reason, [for example, if a drone cannot manage the payload of an object], rock-and-walk might be a viable option,” says Seo.

Notably, the robots were also able to rock-and-walk objects on upward and downward slopes.

Seo foresees these rock-and-walk technique being helpful for scenarios when helicopters or other machines may not be sufficient to move objects; it could be used evenwhen the object’s shape is not ideal.

“Even if an object proves unsuitable for rock-and-walk, there is still a possibility of adjusting its geometric and mass properties for successful rock-and-walk, for example, by attaching additional masses because the robot system does not have to bear the entire weight of the object,” explains Seo. 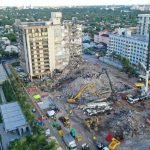 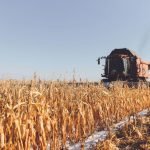 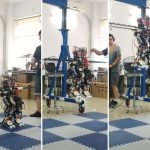 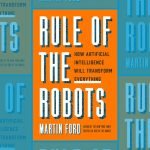 Rule of the Robots: Warning Signs