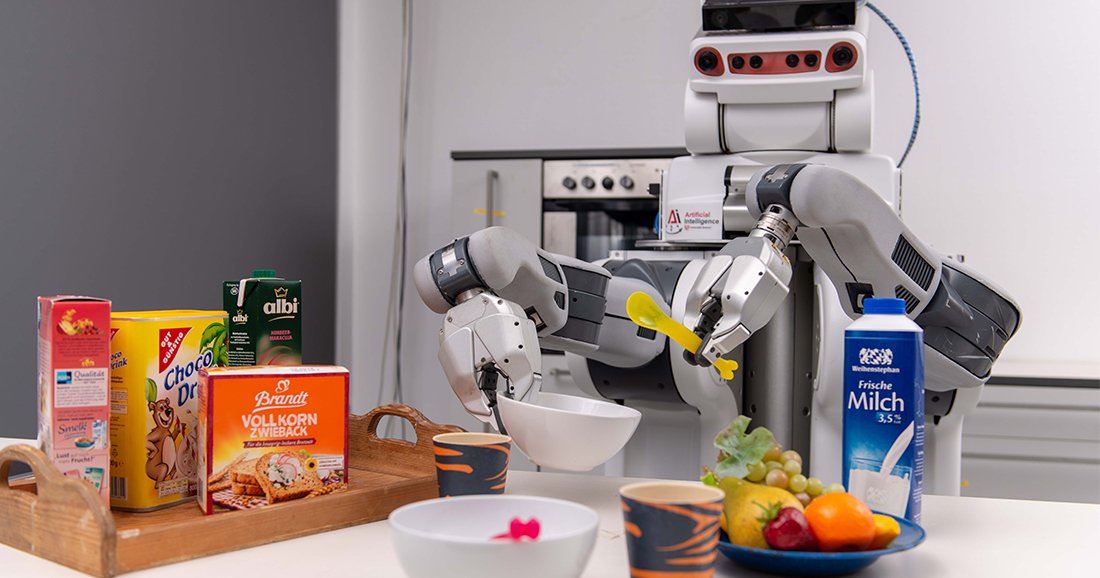 PR2’s job here is to prepare breakfast by bringing a bowl, a spoon, a cup, a milk box, and a box of cereal to a dining table. After breakfast, the PR2 then has to place washable objects into the dishwasher, put the cereal box back into its storage location, toss the milk box into the trash. The objects vary in shape and appearance, and the robot is only given symbolic descriptions of object locations (in the fridge, on the counter). It’s a very realistic but also very challenging scenario, which probably explains why it takes the poor PR2 90 minutes to complete it.

First off, kudos to that PR2 for still doing solid robotics research, right? And this research is definitely solid—the fact that all of this stuff works as well as it does, perception, motion planning, grasping, high level strategizing, is incredibly impressive. Remember, this is 90 minutes of full autonomy doing tasks that are relatively complex in an environment that’s only semi-structured and somewhat, but not overly, robot-optimized. In fact, over five trials, the robot succeeded in the table setting task five times. It wasn’t flawless, and the PR2 did have particular trouble with grasping tricky objects like the spoon, but the framework that the researchers developed was able to successfully recover from every single failure by tweaking parameters and retrying the failed action. Arguably, failing a lot but also being able to recover a lot is even more useful than not failing at all, if you think long term.

The clean up task was more difficult for the PR2, and it suffered unrecoverable failures during two of the five trials. The paper describes what happened:

Cleaning the table was more challenging than table setting, due to the use of the dishwasher and the difficulty of sideways grasping objects located far away from the edge of the table. In two out of the five runs we encountered an unrecoverable failure. In one of the runs, due to the instability of the grasping trajectory and the robot not tracking it perfectly, the fingers of the robot ended up pushing the milk away during grasping, which resulted in a very unstable grasp. As a result, the box fell to the ground in the carrying phase. Although during the table setting the robot was able to pick up a toppled over cup and successfully bring it to the table, picking up the milk box from the ground was impossible for the PR2. The other unrecoverable failure was the dishwasher grid getting stuck in PR2’s finger. Another major failure happened when placing the cereal box into its vertical drawer, which was difficult because the robot had to reach very high and approach its joint limits. When the gripper opened, the box fell on a side in the shelf, which resulted in it being crushed when the drawer was closed.

Failure cases including unstably grasping the milk, getting stuck in the dishwasher, and crushing the cereal.

While we’re focusing a little bit on the failures here, that’s really just to illustrate the exceptionally challenging edge cases that the robot encountered. Again, I want to emphasize that while the PR2 was not successful all the time, its performance over 90 minutes of fully autonomous operation is still very impressive. And I really appreciate that the researchers committed to an experiment like this, putting their robot into a practical(ish) environment doing practical(ish) tasks under full autonomy over a long(ish) period of time. We often see lots of incremental research headed in this general direction, but it’ll take a lot more work like we’re seeing here for robots to get real-world useful enough to reliably handle those critical breakfast tasks.

The Robot Household Marathon Experiment, by Gayane Kazhoyan, Simon Stelter, Franklin Kenghagho Kenfack, Sebastian Koralewski and Michael Beetz from the CRC EASE at the Institute for Artificial Intelligence in Germany, was presented at ICRA 2021.