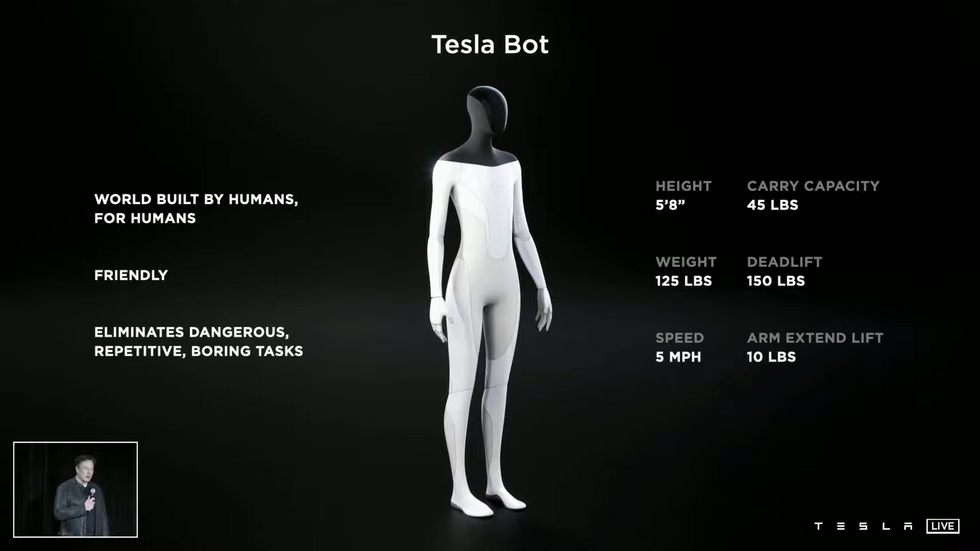 Yesterday, at the end of
Tesla’s AI Day, Elon Musk introduced a concept for “Tesla Bot,” a 125 lb, 5’8″ tall electromechanically actuated autonomous bipedal “general purpose” humanoid robot. By “concept,” I mean that Musk showed some illustrations and talked about his vision for the robot, which struck me as, let’s say, somewhat naïve. Based on the content of a six-minute long presentation, it seems as though Musk believes that someone (Tesla, suddenly?) should just go make an autonomous humanoid robot already—like, the technology exists, so why not do it?

To be fair, Musk did go out and do more or less much exactly that for electric cars and reusable rockets. But humanoid robots are much different, and much more complicated. With rockets, well, we already had rockets. And with electric cars, we already had cars, batteries, sensors, and the
DARPA competitions to build on. I don’t say this to minimize what Musk has done with SpaceX and Tesla, but rather to emphasize that humanoid robotics is a very different challenge.

Unlike rockets or cars, humanoid robots aren’t an existing technology that needs an ambitious vision plus a team of clever people plus sustained financial investment. With humanoid robotics, there are many more problems to solve, the problems are harder, and we’re much farther away from practical solutions. Lots of very smart people have been actively working on these things for decades, and there’s still a laundry list of fundamental breakthroughs in hardware and especially software that are probably necessary to make Musk’s vision happen.

Are these fundamental breakthroughs impossible for Tesla? Not impossible, no. But from listening to what Elon Musk said today, I don’t think he has any idea what getting humanoid robots to do useful stuff actually involves. Let’s talk about why.

Watch the presentation if you haven’t yet, and then let’s go through what Musk talks about.

“Our cars are semi-sentient robots on wheels.”

I don’t know what that even means. Semi-sentient? Sure, whatever, a cockroach is semi-sentient I guess, although the implicit suggestion that these robots are therefore somehow part of the way towards actual sentience is ridiculous. Besides, autonomous cars live in a highly constrained action space within a semi-constrained environment, and Tesla cars in particular have plenty of well-known issues with their autonomy.

“With the full self-driving computer, essentially the inference engine on the car (which we’ll keep evolving, obviously) and Dojo, and all the neural nets recognizing the world, understanding how to navigate through the world, it kind of makes sense to put that onto a humanoid form.”

Yes, because that’s totally how it works. Look, the neural networks in a Tesla (the car) are trained to recognize the world from a car’s perspective. They look for things that cars need to understand, and they have absolutely no idea about anything else, which can cause all kinds of problems for them. Same with navigation: autonomous cars navigate through a world that consists of roads and road-related stuff. You can’t just “put that” onto a humanoid robot and have any sort of expectation that it’ll be useful, unless all you want it to do is walk down the middle of the street and obey traffic lights. Also, the suggestion here seems to be that “AI for general purpose robotics” can be solved by just throwing enough computing power at it, which as far as I’m aware is not even remotely how that works, especially with physical robots.

“[Tesla] is also quite good at sensors and batteries and actuators. So, we think we’ll probably have a prototype sometime next year.”

It’s plausible that by spending enough money, Tesla could construct a humanoid robot with batteries, actuators, and computers in a similar design to what Musk has described. Can Tesla do it by sometime next year like Musk says they can? Sure, why not. But the hard part is not building a robot, it’s getting that robot to do useful stuff, and I think Musk is way out of his depth here. People without a lot of experience in robotics often seem to think that once you’ve built the robot, you’ve solved most of the problem, so they focus on mechanical things like actuators and what it’ll look like and how much it can lift and whatever. But that’s backwards, and the harder problems come after you’ve got a robot that’s mechanically functional.

What the heck does “human-level hands” mean?

“It’s intended to navigate through a world built for humans…”

This is one of the few good reasons to make a humanoid robot, and I’m not even sure that by itself, it’s a good enough reason to do so. But in any case, the word “intended” is doing a lot of heavy lifting here. The implications of a world built for humans includes an almost infinite variety of different environments, full of all kinds of robot-unfriendly things, not to mention the safety aspects of an inherently unstable 125 lb robot.

I feel like I have a pretty good handle on the current state of the art in humanoid robotics, and if you visit this site regularly, you probably do too. Companies like Boston Dynamics and Agility Robotics have been working on robots that can navigate through human environments for literally decades, and it’s still a super hard problem. I don’t know why Musk thinks that he can suddenly do better.

For anyone wondering why I Tweeted “Elon Musk has no idea what getting humanoid robots to do useful stuff actually… https://t.co/5uei4LIpyF

The “human-level hands” that you see annotated in Musk’s presentation above are a good example of why I think Musk doesn’t really grasp how much work this robot is going to be. What does “human-level hands” even mean? If we’re talking about five-fingered hands with human-equivalent sensing and dexterity, those do exist (sort of), although they’re generally fragile and expensive. It would take an enormous engineering effort to make hands like that into something practical just from a hardware perspective, which is why nobody has bothered—most robots use much simpler, much more robust two or three finger grippers instead. Could Tesla solve this problem? I have no doubt that they could, given enough time and money. But they’ve also got every other part of the robot to deal with. And even if you can make the hardware robust enough to be useful, you’ve still got to come up with all of the software to make it work. Again, we’re talking about huge problems within huge problems at a scale that it seems like Musk hasn’t considered.

Great. This is what robots should be doing. But as Musk himself knows, it’s easy to say that robots will eliminate dangerous, repetitive, and boring tasks, and much more difficult to actually get them to do it—not because the robots aren’t capable, but because humans are far more capable. We set a very high bar for performance and versatility in ways that aren’t always obvious, and even when they are obvious, robots may not be able to replicate them effectively.

“Things I think that are hard about having a really useful humanoid robot are, can it navigate through the world without being explicitly trained, without explicit line-by-line instructions? Can you talk to it and say, ‘please pick up that bolt and attach it to the car with that wrench?’ ‘Please go to the store and get me the following groceries?’ That kind of thing.”

Robots can already navigate through the world without “explicit line-by-line instructions” when they have a pretty good idea of what “the world” consists of. If the world is “roads” or “my apartment” or “this specific shopping mall,” that’s probably a 95%+ solved problem, keeping in mind that the last 5% gets ridiculously complicated. But if you start talking about “my apartment plus any nearby grocery store along with everything between my apartment and that grocery store,” that’s a whole lot of not necessarily well structured or predictable space.

And part of that challenge is just physically moving through those spaces. Are there stairs? Heavy doors? Crosswalks? Lots of people? These are complicated enough environments for those small wheeled sidewalk delivery robots with humans in the loop, never mind a (hypothetical) fully autonomous bipedal humanoid that is also carrying objects. And going into a crowded grocery store and picking things up off of shelves and putting them into a basket or a cart that then has to be pushed safely? These are cutting edge unsolved robotics problems, and we’ve barely seen this kind of thing happen with industrial arms on wheeled bases, even in a research context. Heck, even “pick up that bolt” is not an easy thing for a robot to do right now, if it wasn’t specifically designed for that task.

“This I think will be quite profound, because what is the economy—at the foundation, it is labor. So, what happens when there is no shortage of labor? This is why I think long term there will need to be universal basic income. But not right now, because this robot doesn’t work.”

Economics is well beyond my area of expertise, but as Musk says, until the robot works, this is all moot.

“AI for General Purpose Robotics.” Sure.

It’s possible, even likely, that Tesla will build some sort of Tesla Bot by sometime next year, as Musk says. I think that it won’t look all that much like the concept images in this presentation. I think that it’ll be able to stand up, and perhaps walk. Maybe withstand a shove or two and do some basic object recognition and grasping. And I think after that, progress will be slow. I don’t think Tesla will catch up with Boston Dynamics or Agility Robotics. Maybe they’ll end up with the equivalent of Asimo, with a PR tool that can do impressive demos but is ultimately not all that useful.

Part of what bothers me so much about all this is how Musk’s vision for the Tesla Bot implies that he’s going to just casually leapfrog all of the roboticists who have been working towards useful humanoids for decades. Musk assumes that he will be able to wander into humanoid robot development and do what nobody else has yet been able to do: build a useful general purpose humanoid. I doubt Musk intended it this way, but I feel like he’s backhandedly suggesting that the challenges with humanoids aren’t actually that hard, and that if other people were cleverer, or worked harder, or threw more money at the problem, then we would have had general purpose humanoids already.

I think he’s wrong. But if Tesla ends up investing time and money into solving some really hard robotics problems, perhaps they’ll have some success that will help move the entire field forward. And I’d call that a win. 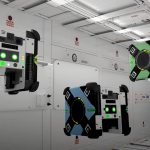 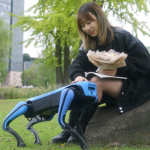