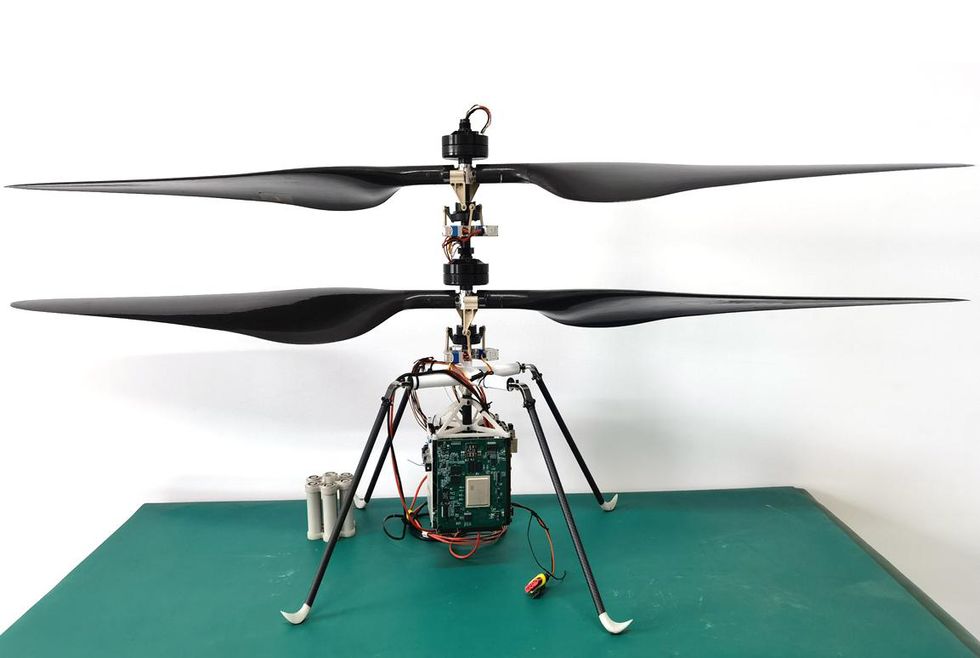 The first ever powered flight by an aircraft on another planetary took place in April when NASA’s Ingenuity helicopter, delivered to the Red Planet along with Perseverance rover, but the idea has already taken off elsewhere.

Like Ingenuity, which was intended purely as a technology demonstration, it uses two sets of blades on a single rotor mast to provide lift for vertical take-offs and landings in the very thin Martian atmosphere, which is around 1% the density of Earth’s.

The team did consider a fixed wing approach, which other space-related research institutes in China have been developing, but found the constraints related to size, mass, power and lift best met by the single rotor mast approach.

Solar panels charge Ingenuity’s batteries enough to allow one 90-second flight per Martian day. The NSSC team is however considering adopting wireless charging through the rover, or a combination of both power systems.

The total mass is 2.1 kilograms, slightly heavier than the 1.8-kg Ingenuity. It would fly at an altitude of 5-10 meters, reaching speeds of around 300 meters per minute, with a possible duration of 3 minutes per flight. Limitations include energy consumption and temperature control.

According to an article published by China Science Daily, Bian proposed development of a helicopter to help guide a rover in March 2019, which was then accepted in June that year. The idea is that by imaging areas ahead the rover could then better select routes which avoid the otherwise unseen areas that restrict and pose challenges to driving.

The small craft’s miniature multispectral imaging system may also detect scientifically valuable targets, such as evidence of notable compounds, that would otherwise be missed, deliver preliminary data and direct the rover for more detailed observations.

The next steps, Bian said, will be developing the craft so as to be able to operate in the very low atmospheric pressure and frigid temperatures of Mars as well as the dust environment and other complex environmental variables.

Bian also notes that to properly support science and exploration goals the helicopter design life must be at least a few months or even beyond a year on Mars.

To properly test the vehicle, these conditions will have to be simulated here on Earth. Bian says China does not currently have facilities that can meet all of the parameters. Faced with similar challenges for Ingenuity, Caltech graduate students built a custom wind tunnel for testing, and the NSSC team may likewise need to take a bespoke approach.

“The next 5 to 6 years are a window for research.” Bian said. “We hope to overcome these technical problems and allow the next Mars exploration mission to carry a drone on Mars.”

When the Mars aircraft could be deployed on Mars is unknown. China’s first Mars rover landed in May, but there is no backup vehicle, unlike its predecessor lunar rover missions. The country’s next interplanetary mission is expected to be a complex and unprecedented Mars sample-return launching around 2028-2030.

Ingenuity’s first flight was declared by NASA to be a “Wright Brothers moment.” Six years after the 1903 Wright Flyer, Chinese-born Feng Ru successfully flew his own biplane. Likewise, in the coming years, China will be looking to carry out its own powered flight on another planet.