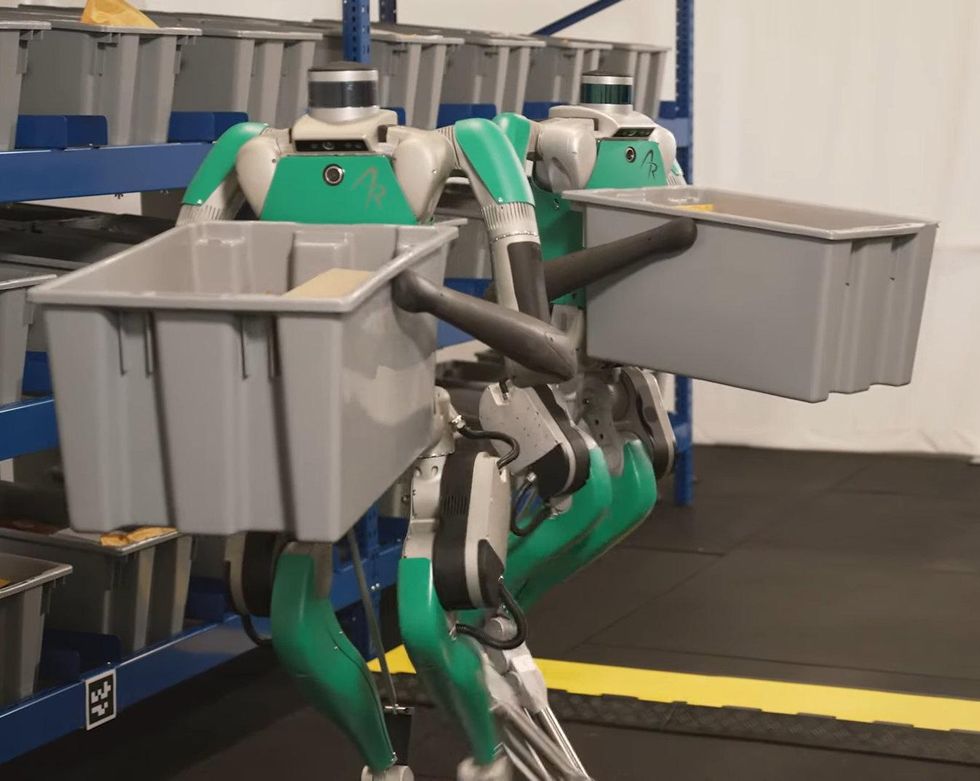 Agility Robotics’ Digit humanoid has been taking a bit of a break from work during the pandemic. Most of what we’ve seen from Agility and Digit over the past year and a half has been decidedly research-y. Don’t get me wrong, Digit’s been busy making humans look bad and not falling over when it really should have done, but remember that Agility’s goal is to make Digit into a useful, practical robot. It’s not a research platform—as Agility puts it, Digit is intended to “accelerate business productivity and people’s pursuit of a more fulfilling life.” As far as I can make out, this is a fancier way of saying that Digit should really be spending its time doing dull repetitive tasks so that humans don’t have to, and in a new video posted today, the robot shows how it can help out with boring warehouse tote shuffling.

The highlights here for me are really in the combination of legged mobility and object manipulation. Right at the beginning of the video, you see Digit squatting all the way down, grasping a tote bin, shuffling backwards to get the bin out from under the counter, and then standing again. There’s an unfortunate cut there, but the sequence is shown again at 0:44, and you can see how Digit pulls the tote towards itself and then regrasps it before lifting. Clever. And at 1:20, the robot gives a tote that it just placed on a shelf a little nudge with one arm to make sure it’s in the right spot.

These are all very small things, but I think of them as highlights because all of the big things seem to be more or less solved in this scenario. Digit has no problem lifting things, walking around, and not mowing over the occasional human, and once that stuff is all sorted, whether the robot is able to effectively work in an environment like this is to some extent reflected in all of these other little human-obvious things that often make the difference between success and failure.

The clear question, though, is why Digit (or, more broadly, any bipedal robot) is the right robot to be doing this kind of job. There are other robots out there already doing tasks like these in warehouses, and they generally have wheeled bases and manipulation systems specifically designed to move totes and do nothing else. If you were to use one of those robots instead of Digit, my guess is that you’d pay less for it, it would be somewhat safer, and it would likely do the job more efficiently. Fundamentally, Digit can’t out box-move a box-moving robot. But the critical thing to consider here is that as soon as you run out of boxes to move, Digit can do all kinds of other things thanks to its versatile humanoid design, while your box-moving robot can only sit in the corner and be sad until more boxes show up.

“We did not set out to build a humanoid robot. We set out to solve mobility.”
—Agility CTO Jonathan Hurst

“Digit is very, very flexible automation,” Agility CTO Jonathan Hurst told us when we asked him about this. “The value of what we’re doing is in generality, and having a robot that’s going be able to work carrying totes for three or four hours, then go unload boxes from trailers for three or four hours, keep up with you if you change your workflow entirely. Many of these spaces are designed specifically around the human form factor, and it’s possible for a robot like Digit to do all of these different boring, repetitive jobs. And then when things get complicated, humans are still doing it.”

The value of having a human-like robot in a human environment comes into play as soon as you start thinking about typical warehouse situations that would be trivial for a human to solve but that are impossible for wheeled robots. For example, Hurst says that Digit is capable of using a stool to reach objects on high shelves. You could, of course, design a wheeled robot with an extension system to allow it to reach high shelves, but you’re now adding more cost and complexity, and the whole point of a generalist humanoid robot is that in human environments, you just don’t have to worry about environmental challenges. Or that’s the idea, anyway, but as Hurst explains, the fact that Digit ended up with a mostly humanoid form factor was more like a side effect of designing with specific capabilities in mind:

We did not set out to build a humanoid robot. We set out to solve mobility, and we’ve been on a methodical path towards understanding physical interaction in the world. Agility started with our robot Cassie, and one of the big problems with Cassie was that we didn’t have enough inertia in the robot’s body to counteract the leg swinging forward, which is why Digit has an upright torso. We wanted to give ourselves more control authority in the yaw direction with Cassie, so we experimented with putting a tail on the robot, and it turns out that the best tail is a pair of bilaterally symmetrical tails, one on either side.

Our goal was to design a machine that can go where people go while manipulating things in the world, and we ended up with this kind of form factor. It’s a very different path for us to have gotten here than the vast majority of humanoid robots, and there’s an awful lot of subtlety that is in our machine that is absent in most other machines.

IEEE Spectrum: So are you saying that Digit’s arms sort of started out as tails to help Cassie with yaw control?

Jonathan Hurst: There are many examples like this—we’ve been going down this path where we find a solution to a problem like yaw control, and it happens to look like it does with animals, but it’s also a solution that’s optimal in several different ways, like physical interaction and being able to catch the robot when it falls. It’s not like it’s a compromise between one thing and another thing, it’s straight up the right solution for these three different performance design goals.

Looking back, we started by asking, should we put a reaction wheel or a gyro on Cassie for yaw control? Well, that’s just wasted mass. We could use a tail, and there are a lot of nice robots with tails, but usually they’re for controlling pitch. It’s the same with animals; if you look at lizards, they use their tails for mid-air reorienting to land on their feet after they jump. Cassie doesn’t need a tail for that, but we only have a couple of small feet on the ground to work with. And if you look at other bipedal animals, every one of them has some other way of getting that yaw authority. If you watch an ostrich run, when it turns, it sticks its wing out to get the control that it needs.

And so all of these things just fall into place, and a bilaterally symmetrical pair of tails is the best way to control yaw in a biped. When you see Digit walking and its arms are swinging, that’s not something that we added to make the motion look right. It looks right because it literally is right—it’s the physics of mobility. And that’s a good sign for us that we’re on the right path to getting the performance that we want.

“We’re going for general purpose, but starting with some of the easiest use cases.”
—Agility CTO Jonathan Hurst

Spectrum: We’ve seen Digit demonstrating very impressive mobility skills. Why are we seeing a demo in a semi-constrained warehouse environment instead of somewhere that would more directly leverage Digit’s unique advantages?

Jonathan Hurst: It’s about finding the earliest, most appropriate, and most valuable use cases. There’s a lot to this robot, and we’re not going to be just a tote packing robot. We’re not building a specialized robot for this one application, but we have a couple of pretty big logistics partners who are interested in the flexibility and the manipulation capabilities of this machine. And yeah, what you’re seeing now is the robot on a flattish floor, but it’s also not going to be tripped up by a curb, or a step, or, a wire cover, or other things on the ground. You don’t have to worry about anything like that. So next, it’s an easy transition next to unloading trailers, where it’s going to have to be stepping over gaps and up and down things and around boxes on the floor and stuff like that. We’re going for general purpose, but starting with some of the easiest use cases.

Damion Shelton, CEO: We’re trying to prune down the industry space, to get to something where there’s a clear value proposition with a partner and deploying there. We can respect the difficulty of the general purpose use case and work to deploy early and profitably, as opposed to continuing to push for the outdoor applications. The blessing and the curse of the Ford opportunity is that it’s super interesting, but also super hard. And so it’s very motivating, and it’s clear to us that that’s where one of the ultimate opportunities is, but it’s also far enough away from a deployment timeline that it just doesn’t map on to a viable business model.

This is a point that every robotics company runs into sooner or later, where aspirations have to succumb to the reality of selling robots in a long-term sustainable way. It’s definitely not a bad thing, it just means that we may have to adjust our expectations accordingly. No matter what kind of flashy cutting-edge capabilities your robot has, if it can’t cost effectively do dull or dirty or dangerous stuff, nobody’s going to pay you money for it. And cost effective usefulness is, arguably, one of the biggest challenges in bipedal robotics right now. In the past, I’ve been impressed by Digit’s weightlifting skills, or its ability to climb steep and muddy hills. I’ll be just as impressed when it starts making money for Agility by doing boring repetitive tasks in warehouses, because that means that Agility will be able to keep working towards those more complex, more exciting things. “It’s not general manipulation, and we’re not solving the grand challenges of robotics,” says Hurst. “Yet. But we’re on our way.”